BSI’s MACE is a powerful yet easy to use and flexible application capable of simulating a contested battlespace in the air, land, and sea operational domains, as well as the electromagnetic spectrum.

MACE is a PC-based Computer Generated and Semi-Automated Forces (CGF/SAF) application that complies with the Distributed Interactive Simulation (DIS) standard for simulation interoperability.

MACE has a true GIS core that supports industry-standard raster and vector formats to provide a worldwide battlespace.

MAKE IT YOUR ONE NEXT-GENERATION SIMULATION ENVIRONMENT!

Please contact us to request your fully-functional evaluation copy. 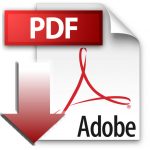 What is the Modern Air Combat Environment (MACE)?

MACE is a physics-based, many-on-many simulation and threat environment with a large order of battle, ideally suited for both standalone mission rehearsal and distributed mission simulation. MACE provides computer generated forces (CGF), sometimes called semi-autonomous forces (SAF), as well as scenario creation, management and IOS features. Using MACE, you can quickly and easily extend your distributed simulation framework. MACE supports the Distributed Interactive Simulation (DIS) architecture including simulation management, entity state, fire, detonate and emissions PDUs. Please feel free to contact us if you have any questions or would like pricing information on MACE. 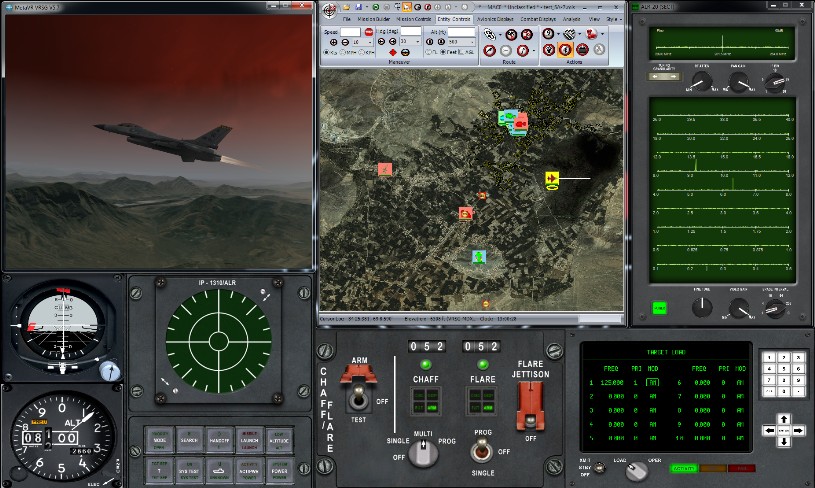 MACE is configurable to include built-in avionic and combat displays.

The One SAF You Need for Standalone Training

MACE’s large order of battle is fully extensible by the end-user, meaning users can add new platforms, weapons and emitters, even customize RADAR pulse, scan and beam characteristics. Because MACE can generate semi-autonomous air and ground forces (including air defense systems), it is the only CGF/SAF you need for robust, standalone CAS training even in contested/non-permissive environments. MACE was designed to put the power of distributed simulation in the user’s hands, with a logical, consistent and easy-to-understand user interface and fast learning curve.

MACE works seamlessly with existing mission planning systems, such as the Portable Flight Planning System (PFPS), Joint Mission Planning System (JMPS) and FalconView. Users can import routes/orders of battle into MACE, or create them from scratch in MACE itself. MACE missions are not scripted; actions can be pre-planned or dynamically injected into the scenario in real-time.

MACE uses an energy-based aerodynamic model for aircraft flight. Specific Excess Power (Ps) is the primary driver for describing an aircraft’s flight performance. At positive values of Ps an aircraft is free to turn, climb or accelerate; when Ps is negative an aircraft is forced to decelerate or dive or a combination of both. Ps is also useful to depict an aircraft’s speed-altitude envelope, if Ps has reached zero, then the aircraft can no longer climb nor accelerate thus the aircraft has reached either its ceiling or maximum level velocity. When an aircraft maneuvers, it retrieves the specific excess power of the aircraft at its current altitude, Mach number, and g-loading. It then initiates a climb angle, turn angle, and rate of acceleration based on its specific excess power data-tables. As the aircraft’s altitude, speed, and loading changes, its energy state changes. The Energy model continuously retrieves the available excess power and adjusts its climb angle, turn angle, and rate of acceleration to reflect the new energy state. An energy based aerodynamic model is a good balance between reasonably-close aircraft performance and limited CPU usage when trying to simulate large numbers of constructive forces.

MACE uses a physics-based aerodynamic model and limited guidance model for missile fly-outs. Missile aerodynamics are derived from weapon thrust, drag, and weight. Weapon thrust is calculated by the motor’s mass flow rate and specific impulse. Drag is calculated by the missile’s drag reference area, coefficient of drag (subsonic and supersonic), speed, and atmospheric conditions at the flight altitude. Missile weight is reduced as propellant is burned. The missile flight profile is based on a four-stage approach that includes a free fall time, booster stage, sustained stage, and glide stage. The guidance model will shape the missile’s flight path to a loft, direct intercept, or dive profile while maintaining the target within the seeker’s gimbal limits in pitch.

MACE also uses a physics-based aerodynamic model for ballistic fly-outs. The ballistic flight path is determined from drag and weight. Drag is calculated by the weapon’s drag reference area, coefficient of drag (subsonic and supersonic), speed, and atmospheric conditions at the flight altitude. The weapon’s pitch is matched to its flight path angle. The ballistic model/equations are flexible enough for bombs, artillery, and bullets.

MACE can simulate an entire Integrated Air Defense System (IADS) including Early Warning, Acquisition, Height Finding and Target Tracking RADAR systems (down to the pulse level). During mission simulation, the EW, HF, ACQ and TT radar sites in ACE are linked together to form an Integrated Air Defense System (IADS). The ability to realistically simulate an IADS is a clear differentiator between MACE and simulations which rely on scripting or simplistic rules to trigger radar activity. In MACE, a complex algorithm is executed for each sensor in the battlespace. Does the sensor have line-of-sight to the target? Is the target obscured by stand-off jamming? Has the sensor ‘burned through’ the jamming, if present? Has chaff bloomed in the resolution cell? Is the radar already tracking its maximum number of targets? Is the target beyond the sensor’s maximum range as determined by the Radar Range equation, taking into account the sensor’s frequency and target’s radar cross section, and not just a simplistic ‘max range’ number? Is the site operating autonomously, or is it linked into the IADS? Can the site still communicate with its parent or child sites? Is the target already assigned to another target tracking site? Which target is the most attractive? MACE answers every single one of these questions, for every single sensor in the battlespace, many times per second.

MACE provides the user with a toolset for defining their own beam, scan and pulse patterns for each emitter. This pulse-level fidelity enables the generation of emitter audio from the pulses as they’re processed by the receiver. Both crystal video and super-heterodyne receivers are modeled within MACE.

Putting it All Together

One of the shortfalls MACE was designed to address is the huge gap between full-fidelity Flight Mission Trainers (FMTs) and other commercially available, DIS capable man-in-the-loop simulations. We simply could not find a product that offered the key capabilities required to interface with FMTs in the DIS/DMO environment. Vendors with good flight physics lacked fidelity in their RADAR models or could not generate RWR audio from the emissions PDUs. Vendors that could generate emitter audio did not have physics-based flight models. So while MACE can be used as a capable threat environment to generate constructive ground, surface and airborne platforms & weapons (at substantially lowers costs than our larger competitors), it can also be used as a “dial a friend” or “dial a foe” simulation, providing physics-based flyable flight models, surface-to-air and air-to-air weapons flyouts, air-to-ground ballistics, pulse-level, multi-mode RADAR simulation and dynamic, parametrically-generated emitter audio for low-cost, man-in-the-loop simulation. When coupled with an image generation system such as MetaVR’s Virtual Reality Scene Generator (VRSG), MACE is a true turnkey simulation. With MACE, you can also quickly transfer control between virtual (man-in-the-loop) and constructive (computer) control, meaning you can take control of and fly an F-16 (for example, to shoot a HARM at a target in support of a strike mission) then send that F-16 back to autopilot (constructive control). Seconds later, you can be flying a MiG-29, overriding the constructive logic for a more realistic air-to-air engagement.

MACE comes standard with a library of avionics and combat displays, all of which can be resized and arranged in savable configurations. Standard displays include:

In addition, a separate Electronic Warfare version of MACE is available (MACE-EW) that includes everything in MACE plus several advanced EW displays, including:

Who uses MACE? Click on a pin below to find out!